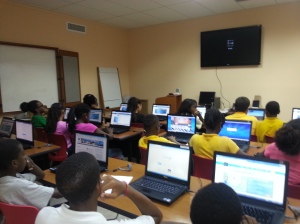 24 young U.S. Virgin Islanders participated in an Hour of Code program held at the St. Croix Department of Labor PCC

The Hour of Code, a worldwide event sponsored by Code.org, is a one-hour introduction to computer science, designed to demystify code and show that anybody can learn the basics. Held during Computer Science Education Week for the second time in 2014, the Hour of Code saw more than 73 million global users (including U.S. President Barack Obama) sit down to discover the logic (and magic) that makes today’s world go ’round!

Five U.S. Virgin Islands schools hosted officially recognized Hour of Code events, while dozens of other individuals and groups also found time to take part. The five schools were: on St. Croix, the Arthur A. Richards Junior High School and Ricardo Richards Elementary School; on St. John the Gifft Hill School; and on St. Thomas, the Antilles School and the All Saints Cathedral School. 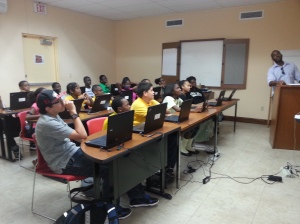 At the Public Computer on St. Croix, United States Virgin Islands, Alexis George was able to expose 24 youngsters from a variety of schools to Hour of Code:

“Last Friday, December 12 approximately 24 St. Croix middle school students between the ages of 12 -14 took part The Hour of Code global event, our students were among some of the 70 plus million participants around the world that tried their hand at coding. The Hidden Genius Project VI was the coordinator of this event and we would like to take this opportunity to say thank you to Virgin Islands Next Generation Network for allowing us to utilize your Public Computer Center, without you extending yourselves this activity would not be a success.

Our belief is that every student should have the opportunity to learn about computer science which helps to foster logic, problem-solving skills, and creativity. Currently, statistic shows that there will be “1,000,000 more jobs than students by 2020″ with computer science being one of the top earning college degree, and computer programming jobs growing at a rate of 2X the national average. This is an opportunity that has exposed these students to computer programming and now we are on our way in preparing them by providing a foundation for them to create and forge a career path for themselves in the field of computer science in the near future. Thank you again and we hope to continue this relationship with your agency as we prepare for future events tailored for the young people of these Virgin Islands.”

Hour of Code is available year ’round on the Code.org web site.

This site uses Akismet to reduce spam. Learn how your comment data is processed.