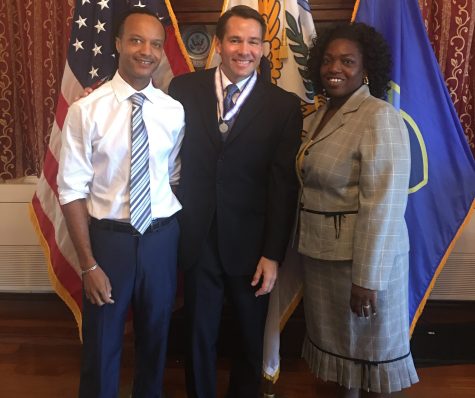 St. Thomas – Governor Kenneth Mapp presented Virgin Island Next Generation Network (viNGN) President and CEO Dr. Mark McGibbon with the Chairman of the Joint Chiefs of Staff Outstanding Public Service Award during a ceremony at Government House on St. Thomas on Tuesday, May 3, 2017.

The Outstanding Public Service Award, which Dr. McGibbon received on January 11, 2017, from United States Marine Corps General Joseph F. Dunford, Jr., is the highest award provided to a citizen and is normally awarded to Federal Employees; however, Dr. McGibbon received this prestigious award while working in the private sector within Lockheed Martin Corporation’s (LMC) Executive Strategic Planning Division. During his LMC employment, he volunteered to teach at the National Defense University (NDU) Information Resources Management College (IRMC). At NDU, most professors taught only 1 or 2 courses; whereas, Dr. McGibbon, as a Visiting Industry Chair Professor taught 19 courses and in all 10 programs offered at the IRMC. No other full-time NDU professor in the history of the college, or since, has taught so many courses, while simultaneously receiving an “A” average on teaching critique questionnaires from 2006 to 2016. Dr. McGibbon also volunteered many hours to teaching leadership and technical management workshops at various other Federal, State and non-profit organizations throughout the Washington DC area, and during that same timeframe, helped to raise college-level scholarship funds for academically deserving students who were economically disadvantaged.

As the CEO & President of viNGN, Dr. McGibbon considers the business of providing broadband internet services to multiple Internet Service Providers (ISPs) throughout the USVI as yet another opportunity to provide public service to the people of the Virgin Islands.

Additionally, Dr. McGibbon continues his volunteer service within the USVI, which includes educating 5th and 6th graders enrolled in the Leadership Program at Juanita Gardine Elementary School, and he continues to dedicate viNGN scholarship funding to students enrolled in the St. Joseph’s Academy Cisco/National Center for Construction Education and Research (NCCER) IT Training Program. Finally, he is a strong advocate of the Virgin Islands Public Computer Centers (PCCs) and Mobile PCC training events, which provide computer literacy and cyber security training throughout the territory. His goal is to ensure the people of the USVI are afforded the opportunity to acquire the requisite leadership and technical skills needed in the 21st century.

The Virgin Islands Next Generation Network (viNGN) was established in 2010 as a public corporation; it is a wholly-owned subsidiary of the Virgin Islands Public Finance Authority. viNGN was funded primarily from an American Recovery and Reinvestment Act (ARRA) grant made by the National Telecommunications and Information Administration (NTIA) as part of a federal program to improve the broadband capacity in the United States, its territories, and the District of Columbia. The program is called the Broadband Technology Opportunities Program (BTOP). For more information regarding viNGN, call (340) 715-8581, or visit http://www.vingn.com.

This site uses Akismet to reduce spam. Learn how your comment data is processed.